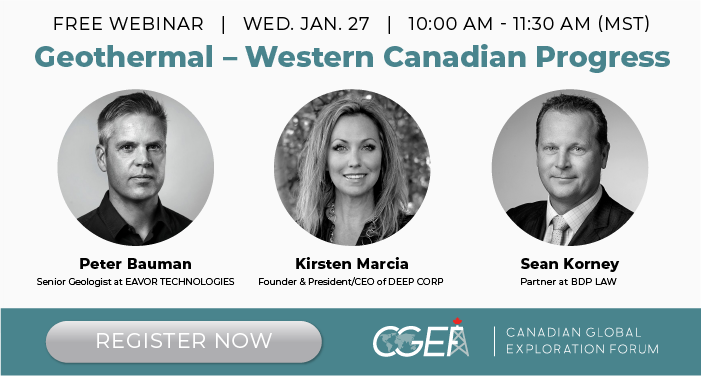 This insightful webinar will address some of the recent progress that Western Canadian companies are having in the Geothermal Arena as well as provide an overview of current legislation.

CGEF is proud to host speakers from across the globe

Join us for this FREE webinar focusing on the activity and opportunities onshore with a brief discussion of the offshore discovery by TPAO. Use password "Turkey2020" to register.

The Turkish oil and gas industry has an active onshore energy industry. Historically it has focused on onshore exploration and production. Recently Turkey has been in the news with the announcement of a large gas discovery in the Black Sea.

This webinar will focus primarily on the activity and opportunities onshore with a brief discussion of the offshore discovery by TPAO. CGEF has three speakers discussing various aspects of the Turkish petroleum industry. Our first speaker will be Mr. Cem Sayer.

Mr. Sayer is the Chairman of the Board & President of Aladdin Middle East Ltd (AME). Aladdin is an independent oil and gas exploration and production company founded in 1961 and focused on the strategic exploration and exploitation of oil and gas assets in Turkey. AME is an industry leader in Turkish upstream and is the most senior private player in Turkey. Mr. Sayer will discuss AME’s operations in Turkey.

Our second speaker is Ms. Berfu Aksoy. Berfu is a seasoned lawyer with extensive experience in Turkey’s energy industry. She is the founding partner of the Aksoy Law Offices based in Ankara and Istanbul. Ms. Aksoy will speak about Turkey’s oil and gas legislation and operating environment. She will also touch on the large offshore discovery recently announced by TPAO.

COVID and concerns about climate change have significantly impacted the oil and gas industry. Many oil companies as well as drilling and oilfield service contractors are now targeting new markets. Not every company is able to enter a new market nor is every market the same. In fact, most markets are different and complex. In this presentation, I will examine key internal and external factors that should be considered when targeting new markets.

The Global COVID Pandemic has temporarily altered the lives of the World’s population, but at a time when its estimated growth of over 1% annually will add 2.8 billion more people by 2050 (i.e. 30+%).​ This dramatic growth will expect and require more and more sustainable energy. Read more.

The Global COVID Pandemic has temporarily altered the lives of the World’s population, but at a time when its estimated growth of over 1% annually will add 2.8 billion more people by 2050 (i.e. 30+%).​ This dramatic growth will expect and require more and more sustainable energy. The underlying facts show​ that based on current technology, this simply can not be done without the use of hydrocarbons, and​ increasingly gas, which remains one of the most effective and efficient fuels, even in this age of new ‘energy​ transition’. The all too emotional, but ill informed faculties of the World need to understand now that​ without appropriate upstream investment, the upstream industry’s ability to meet this demand within the​ next 4 years is in question (even with the temporary high inventories caused by Covid) and by which time it​ will simply been too late for any E&P efforts (which traditionally can take between 2‐10 years to deliver from​ exploration to production) to fill the gap.​

The already limited E&P expertise being lost by retirement, with very few technically experienced (G&G and​ Engineering) people available to find new resources (due to the legacy of the extended 1984 – 2003​ industry crash) leaves the World in a energy dilemma unless a completely new source of energy is found to​ replace oil and gas very quickly indeed (which seems unlikely). The World therefore needs new E&P now, so​ potentially within 12 – 24 months if the new trusted sources (including Rystad )predicting supply shortfalls​ of 5 MMbbls / day by 2025 are correct, commodity prices do not rise very much more sharply than is​ currently predicted.​

The ‘early bird catches the worm’ is a very old saying from the late 1600’s and is perhaps very relevant for​ investors looking for a prime opportunity which equally understand the underlying facts about energy cycles​ and the facts that underpin the next 2‐5+ years rather than a quick buck over the next few weeks and​ months. Few have ever consistently predicted the big commodity price swings so what has changed now?​ The facts seem to suggest a swing back the other way, particularly as the resource play boom predicted by​ many to be the savour of global supply, appears to have hit the buffers ladened with unsupportable debt​ even before Covid, will not help.​

Filling the future hole in supplies, whilst satisfying the demands of the Worlds new Green Army that remains​ dependent on hydrocarbon energy, unless they are willing to accept significant change (i.e. like being locked​ down for the next 30 years as we have these last 12 weeks) and paying much higher prices for sustainable​ energy, is something that collectively needs to be considered and actioned by everyone in the World,​ including the users, producers and governments. Only time will tell but the evidence seems clear”

The date of the recorded webinar was May 20, 2020.
Chinook Consulting and Oea are delighted to jointly offer an online information session about Romanian Oil & Gas industry. Both companies have previous and ongoing operations in Romania. Their experience will benefit CGEF members who intend to penetrate or consolidate their position in the Romanian market. from CGEF on Vimeo.